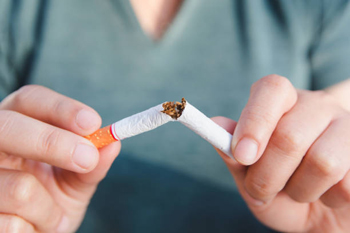 How Can CBD Reduce Cigarette Use?

Smoking has been a public health concern for decades now. Today, there are more people than ever trying to quit smoking to improve their health and quality of life. And they’re lucky enough to have lots of tools at their disposal, such as different forms of therapy, nicotine patches and vape alternatives. One of the most promising of these new alternatives is CBD, a cannabis derivative with a lot of health benefits and the potential to fight addiction. Here’s how it works, and how it could help people quit smoking.

In 2013, a group of scientists at University College in London examined the effects of CBD on cigarette smokers. They gave 24 smokers either a CBD inhaler or a placebo inhaler and told them to use it whenever they felt the urge to smoke. The smokers were not asked to consciously reduce the number of cigarettes that they smoked, but simply to use the inhaler a few times a day. After one week, the smokers who were given the placebo had smoked the same number of cigarettes as usual. But those given CBD actually smoked 40% fewer cigarettes than their normal habit. The scientists behind the experiment concluded that CBD should be considered as a potential treatment for nicotine addiction.

Following the 2013 experiment, the scientists wanted to find out more about the reason why CBD could make people smoke less. In 2018, they conducted another experiment, giving smokers either a single dose of 800 mg of oral CBD or a placebo. The smokers then had to quit smoking for a day. The next day, they were all suffering from some withdrawal symptoms. However, the subjects who had been given CBD perceived cigarettes as being less desirable than those in the placebo control group. This suggests that CBD could affect certain pathways in the brain, making cigarettes less attractive to us. This is an important finding because we know that the image of cigarettes plays a crucial role in nicotine addiction, and can even be more addiction-causing than the actual psychoactive substance nicotine.

CBD could help people to quit smoking by lowering stress and anxiety. When people quit smoking, they often experience heightened stress. This can be very distressing, and even more debilitating than the craving for cigarettes.

Thankfully, CBD is well-known for its anxiety-fighting effects. Several studies have found that a daily dose of CBD can help people with anxiety disorder, panic attacks, and social anxiety.

We are still waiting for studies that examine the effect of CBD on the anxiety of people with nicotine withdrawals. But so far, the established link between CBD and lower levels of anxiety suggests it could be a good treatment option for people who are dealing with withdrawal symptoms.

People who hear about the benefits of CBD for cigarette smokers are sometimes worried. They wonder: will I just replace my addiction to nicotine with an addiction to cannabis? Can I become dependent on daily doses of CBD?

First, it’s important to note that CBD is different from other forms of cannabis commonly used for recreational purposes. THC is the molecule that’s responsible for making you high when smoking cannabis, and it can create a feeling of euphoria that some people find addictive. On the other hand, CBD isn’t psychoactive and doesn’t cause dependence or tolerance.

Today, we have reports on dozens of different studies that have researched the effects and side-effects of CBD. So far, none of them show any potential for addiction, even in the long term.

So, while it’s true that you may want to replace smoking cigarettes with taking CBD for a while, the two are by no means equivalent. CBD can help you in the early stages of your nicotine-quitting journey, but it’s a substance you won’t find difficult to quit a few weeks or months down the line.

How can CBD help me quit smoking?

So how do you use CBD to quit smoking? There are a lot of different options, each with its own set of pros and cons. One of the most popular ones is to smoke or vape CBD whenever you feel the urge to smoke a cigarette. This can be very effective, as it allows you to keep the habitual gesture and feeling of smoking while quitting nicotine. Smoking or vaping CBD releases the substance into your body quickly and effectively, and it may be one of the best ways to enjoy its benefits against stress and anxiety. But keep in mind that if you smoke CBD buds in a pipe or a joint, you will still be causing some damage to your lungs. That’s why vaping is a better option. You can also enjoy daily doses of CBD in the form of drops placed under your tongue, CBD capsules, gummies or even a transdermal patch. These options are good for providing slow-release CBD that lasts the whole day, which could be useful if you also want to lose the habit of smoking or vaping something several times a day. Blackbird Creek Farms CBD Vanilla drops and gummies are great for overall, systemic, slow release of CBD to inhibit the urge to smoke cigarettes all day.